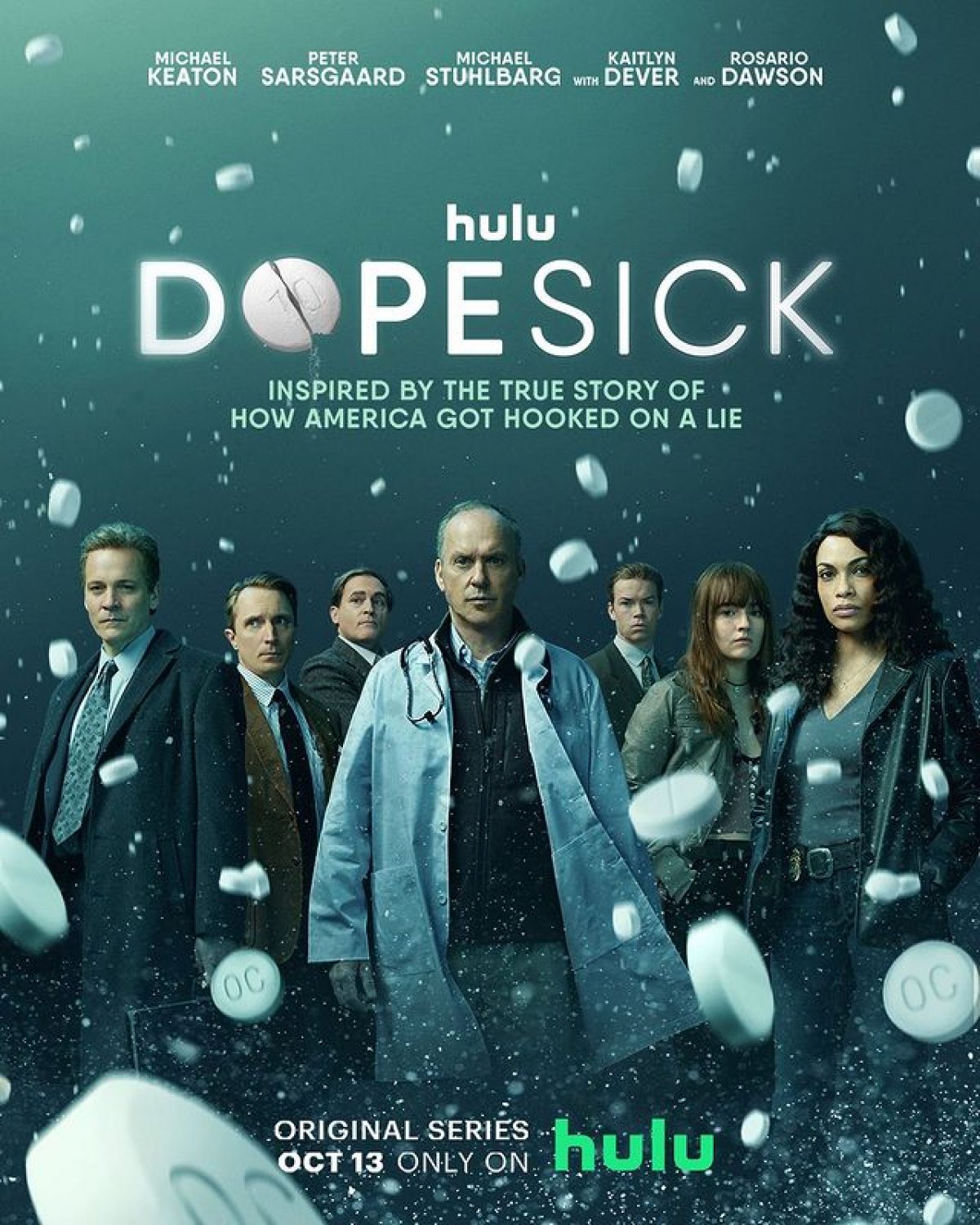 Hulu®’s new streaming miniseries Dopesick® has struck a chord with its depiction of the impact of Oxycontin® in the 1990s and 2000s. Viewers described it as “honest and engrossing,” “morally intriguing,” and “infuriating.”

Part of what makes Dopesick so effective is its sympathetic portrayal of both the doctors who prescribed Oxycontin and the patients who developed Opioid Use Disorders after using the medication. Putting a human face to addiction makes Dopesick more than just a historical drama. The many characters in Dopesick are not statistics on a medical report, but hard working innocent victims. Anyone who has experienced addiction themselves or a loved one, can identify with the struggle of the characters in Dopesick.

The protagonist, Dr. Finnix (portrayed by Michael Keaton), is a fictional character but represents the true accounts from many doctors in Beth Macy’s nonfiction book, Dopesick: Dealers, Doctors and the Drug Company that Addicted America. Finnix is initially skeptical of the claim by Purdue Pharma® sales representatives that less than 1% of Oxycontin users will become addicted. However, Finnix is convinced of the medication’s effectiveness when he sees the pain relief it provides to his patients. Finnix comments in episode two that his patients, mostly coal miners, “…carry the burden of building this nation on their backs, and they deserve to do it without pain. So if this drug can help these good folks have a better life and feed their families, well, then Purdue Pharma is doing these people, my people, a great service, so God bless them for it.”

As we know now, the real doctors that Finnix represents were right to be skeptical. The opening scene of the show features Richard Sackler, a member of the Sackler family, owners of Purdue Pharma, pitching the idea of an opioid for long-term use to treat moderate pain. Prior to this, we are told, opioids were thought to be highly potent and addictive, used mostly for patients in extreme pain such as terminal cancer patients. A board member remarks to Sackler, “I don’t see a doctor prescribing an opioid for long-term use.”

Sackler replies, “You don’t chase a market. You create it.”

We see in the following episodes how Purdue Pharma created a narrative around pain relief that made the idea of “non-addictive” opioid medication so appealing.

Dopesick is the latest Hollywood movie or TV show to dramatize the opioid epidemic. It emphasizes the excruciating withdrawal symptoms when a user attempts to stop using opioids. It’s not until episode four that the word “dopesick” is first uttered. A physician paints a colorful picture: “The pain from withdrawal is so overwhelming that a person can feel like they are literally going to die if they don’t get more drugs.”

The Recovery Research Institute defines “dope sick” as “(stigma alert) a slang term used to reference withdrawal symptoms from opioids, such as heroin. It is preferable to use more accurate terminology such as suffering from withdrawal.”

According to American Addiction Centers, signs of withdrawal from opioids can include:

These withdrawal symptoms, or “dopesickness,” can make it very difficult for many patients with Opioid Use Disorder to have a successful recovery in abstinence-only programs. That is why outpatient treatment programs have introduced Medications for Opioid Use Disorder.

There is an adage in drug treatment: “You can’t treat a dead patient.” Medications for Opioid Use Disorder afford patients some relief from dopesickness so they can focus on their recovery instead of how to get their next dose of opioids.

“The thing that won me over for the AZZLY system was that they paid attention to the provider doing Medication-Assisted Treatment as it was called at the time or MOUD as it’s called now — the Medications for the Treatment of Opioid Use Disorders.

So if you were a practitioner who had the X-Waiver on your DEA and you were able to write prescriptions for individuals who needed buprenorphine for their Opioid Use Disorder, the AZZLY system was designed to accommodate the way in which you practice.

And there are electronic health records that work with doctors in their offices that don’t pay any attention to the particular rules and regulations that you operate under if you treated someone with a substance use disorder including the additional protections that have to be in that record.

There are electronic health records that work with treatment providers that don’t take into account how the individual medical practitioner does his or her work. The AZZLY system decided to take that on. It was the first in its class to take that on and actually does it quite well.

So it’s quite responsive to a physician who may be seeing people for Hepatitis C, which by the way is surging now and has started to surge during COVID, who may be seeing people for their liver disease but also wanting to treat their Opioid Use Disorder. That record can be superimposed on what they’re using in their office and allow them to keep the records adequately for the medication treatment of the Opioid Use Disorder.

I like AZZLY because it recognized how I had to modify my practice in order to treat Medications for Opioid Use Disorder, and they took that on when a lot of people wouldn’t take that on.

We offer an electronic health record, patient management, and revenue cycle management solution to help providers achieve better patient and business outcomes. We designed our software AZZLY Rize from the ground up with the feedback of mental health and addiction treatment professionals to deliver a modern platform suited to their needs. In AZZLY Rize, providers can accomplish intake, scheduling, treatment plans, e-prescribing, medication history, staff communications, and more all in one place. Fill out this form to see demos of AZZLY Rize now, or speak with a representative.

We recommend anyone in this industry check out Dopesick. The miniseries premiered October 13, 2021, and new episodes are being posted each Wednesday on Hulu.com, which offers a 30-day free trial. In a description provided by Hulu, “The unsparing yet deeply human portraits of the various affected families and their intersecting stories hold up a mirror to where America is right now, while shining a hopeful light on the heroes battling the worst drug epidemic in American history.” The series is based on the nonfiction book Dopesick: Dealers, Doctors and the Drug Company that Addicted America by Beth Macy.

We have seen the cost of opioid addiction, and Dopesick dramatizes it as well as anyone. Let us help you serve people with Opioid Use Disorder. Together we can make a difference.